In my post yesterday, Standardizing Place Names - Using FTM 2011 to Merge Place Names, I demonstrated how easy it was to pick standardized place names from the standard place list in Family tree Maker 2011.  I noted that some of the place names in my database were still non-standard - i.e., not in the FTM 2011 list of standard place names, and that I needed to resolve them by hand.

In this post, I want to demonstrate the process of standardizing place names, and getting the geotag coordinates of the place, in Family Tree Maker 2011.

I'm going to use Delhi, in Norfolk county, Ontario, Canada as the example.  Unfortunately, the standard place list in FTM 2011 for ALL Canadian towns or cities do not include the county that the town is in, and so all of them are going to have to be fixed in this process.

In the "Places" workspace, I highlighted "Delhi, Norfolk, Ontario, CANADA" on my list of places.  I clicked on "Place" in the menu, and then "Resolve Place Name" to get the dropdown box.  You can see that it lists "Delhi, , Ontario, Canada as the standard place name.  Here is the Place list before I did any standardizing: 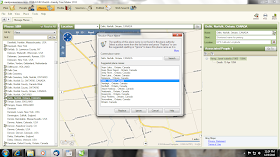 In the Place list on the left, I have three items for Delhi Cemetery in Delhi (when I clicked on the first one, the map of Delhi, India came up) and six items for the town of Delhi in various forms.  I want to merge all of them into one for the cemetery and one for the town, and geotag them in the process.

I chose the one above because it showed the right place on the map, and edited the place name in the upper right-hand corner.  It now reads "Delhi, Norfolk, Ontario, Canada."  I clicked on the pushpin below the location name on the "Location" line, and saw: 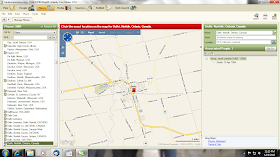 The red band at the top of the page says to "Click the exact location on the map for Delhi, Norfolk, Ontario, Canada."  I clicked on the name of the town, Delhi, on the map, and the geotag for the place appeared in the "Location" field in the upper right-hand corner of the screen: 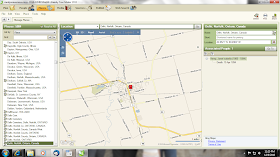 I did an Edit -- Copy on my standard name of "Delhi, Norfolk, Ontario, Canada" so that I could use the same place name consistently, and fixed the other five non-standard place names on my list.  I edited the Delhi Cemetery name to read "Delhi Cemetery, Delhi, Norfolk, Ontario, Canada" and fixed those three entries also.  Now my updated list of the nine Delhi entries is only two, and they have been geotagged, as shown below: 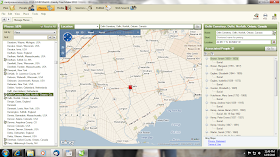 While they are still listed as non-standard places in the FTM 2011 place name list, they are geotagged and the map will come up when the place name is clicked on.  That's the best I can do at the moment.  hopefully, Family Tree Maker will add counties to their official list of standard place names in Canada.  I hope that they will greatly expand their list of place names in England too - it is pretty sparse.

I'm still in the process of working through the Place names in my database standardizing them as shown in my last post.  The next task will be to geotag as many of my non-standard place names as possible.

I tested this process in RootsMagic 4 and Legacy Family Tree 7 and thought that the FTM 2011 process was the easiest for me to use.  I liked that the process for changing the place name to a standardized version and geotagging that place was easy to use, and was all on one screen.

What I don't know is if a geotag of a place name in FTM 2011 will transfer across through a GEDCOM file to another program like RootsMagic or Legacy.  I would hate to have to do all of this again at some time.  I guess I better find out sooner rather than later.  I'll let you know...