Another General Affidavit was filed on 29 April 1901 by two women who knew Isaac Seaver for 58 years and knew the name of Isaac's first wife. 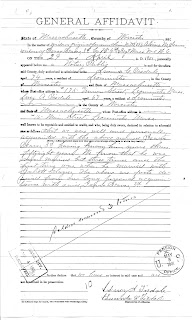 The transcription is (handwritten words underlined and in italics):

We further declare that we have no interest in said case and are
not concerned in its prosecution.

One interpretation of this affidavit is that the widow Alvina Seaver needed someone to vouch for the name of his first wife.  Alvina gave Juliett's name, and her death date, in her General Affidavit filed on 20 April 1901.

This is the first notice I've taken of Lucinda C. Tisdale and Lucy A. Tisdale.  These are two different women with essentially the same name.  They claim to have known Isaac Seaver for 58 years - that would make their first acquaintance in 1843, when Isaac was age 20, Lucinda was age 16, and Lucy was age 9.  Were they relatives, neighbors, or childhood friends?  If so, are they single, married or widowed?  Interesting puzzle.  Maybe I'll check it out this next week.