Whether through good fortune or happenstance, I have only one known Civil War Soldier.

"State of Massachusetts County of Worcester, SS,
on this 11th day of June, A.D. one thousand eight hundred and ninety two,
personally appeared before me, a Notary Public
within and for the County and State aforesaid, Isaac Seaver 3d
aged 68 years, a resident of the town of Clinton
County of Worcester State of Massachusetts, who being
duly sworn according to law, declares that he is the identical Isaac Seaver 3d
who was ENROLLED on the 10th day of August, 1864 in  Company H
(private) 4th Reg't H'y Arty. Mass. Vol's
in the war of the rebellion, and served at least
ninety days, and was HONORABLY DISCHARGED at Fort Richardson, Va. on the 19th
day of June, 1865. "

Isaac registered for the Civil War draft in 1863, as shown in Isaac Seaver's Civil War Draft Registration Record.  His occupation was listed as a mechanic.

Before he left for his service in the 4th Regiment of Massachusetts Volunteer Heavy Artillery, Isaac and Lucretia Seaver had their pictures taken and put in a Union Case photograph: 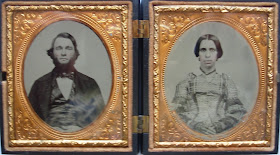 When did the 4th Regiment of the Massachusetts Volunteer Heavy Artillery form and here did they serve?  There is a Wikipedia article that describes their service:

"In the late summer of 1864, fourteen companies of heavy artillery were raised throughout Massachusetts for the purpose of coastal defense of the state. They were to be "unattached", thus not part of a regiment, and sent to various military locations for a one-year term. They were numbered 17 through 30, and were the Unattached Companies of Heavy Artillery. They encamped on Gallops Island in Boston Harbor, where they organized and were mustered in during latter part of August and into the first days of September 1864. In September, they were ordered to Washington, DC for garrison duty in the forts surrounding the capital. The last companies to leave, the 29th and 30th, left on 26 Sept and 29 Oct, respectively.

"On 12 Nov 1864, a War Department order consolidated 12 of the companies, numbered 17 through 28, into one regiment, the 4th Regiment Massachusetts Heavy Artillery. Col William S King, formerly of the 35th Massachusetts Infantry, was put in command. They remained in Washington for the remainder of the war, until their mustering out on 17 June 1865."

That sounds very unexciting - it sounds like they were the reserve force sent to protect Washington DC in case the Confederates attached the city.  The "unexciting" service is borne out by the number of those in the regiments that died:  the Wikipedia article says:

"The regiment consisted of 72 officers and 1757 enlisted men, 21 of them dying by disease or accident."

For this 10 months of service, Isaac Seaver received a pension in 1892, as detailed in my series Treasure Chest Thursday - Isaac Seaver's Civil War Pension File: Compendium of Posts.
Randy Seaver at 1:07 PM
Share