...
The previous posts in this series are:

Last night, I added more links to historical records on Ancestry.com to my Ancestry Member Tree using my iPhone - and I did this only for persons in the Tree that I had not added links to records previously.  Let's see how we did:

1)  Before I tried to Sync the FTM 2012 database to the modified Ancestry Member Tree, I took this screen shot of the Plan workspace: 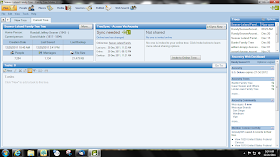 The screen told me that I was not in Sync with the Ancestry Member Tree, and that a Sync was needed.  So I clicked on the Sync Now button and waited while the FTM 2012 database synced to the ancestry Member Tree. 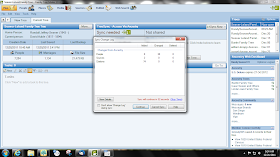 The Sync Change Log told me that these items had changed: 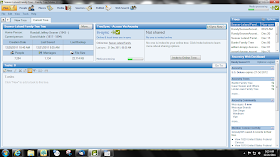 The FTM 2012 database and the Ancestry Member Tree are now in Sync.

Note that the "Media processing" ribbon is only partially green, so I have to wait until that finishes.

4)  After the "Media processing" ribbon finished, I clicked on the "Media" workspace tab and saw: 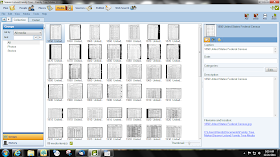 There are now 89 images in the Media workspace, up from 67 yesterday.  So while I added 74 new Citations, only 22 new images were added to the database.  this is because more than one person were linked to the images, but citations were added for each Fact added to each Person.

5)  What about the Person screens for these added citations?  Here is the screen for Severt Oliver Leland: 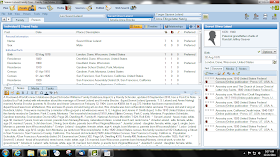 There are now seven Birth Facts for Severt Leland, and six of them have images attached to them.  I checked the other persons with Facts and links to record images added last night, and they all appear to be there.

*  All of the Facts added and the images attached using the iPhone to an Ancestry Member Tree were added to the Ancestry tree, and then synced to the Family Tree Maker 2012 database.

*  My conclusions here are:

*** Be very careful how you add Facts and links to historical record images using any of these tools.  *** Keep your FTM 2012 database in Sync with your Ancestry Member Tree.
*** Don't add content to them separately - use them one at a time, and Sync afterwards.  That way the last one you worked on can be used to create a new database for the other.
*** If you add content with an iPhone or iPad or another mobile device, be sure to check the Ancestry Member Tree that the content was added, and then Sync the information to the FTM 2012 database.
*** If you discover that some Media did not download to FTM2012, then try the Ctrl-F5 key combination to add missing media.