Genea-Musings is #80 on the GenealogyInTime Hit Parade

Being a "Numbers Guy," I collected Top 40 music surveys in the 1950s and 1960s, once having the largest collection in the USA.  So I'm partial to Top NN lists of all types.  Especially when I make the list!

Genea-Musings is #80 on the GenealogyInTime digital magazine list of the Top 100 Genealogy Websites for 2013! 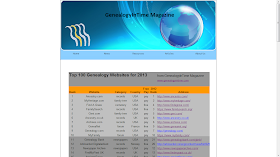 And aways down the list, there is little old Genea-Musings at #80:

I am honored and flattered to be on the list.  Thank you, GenealogyInTime, for including my little blog that ticks right along with a staff of 1.0 persons!

The measurement tool that GenealogyInTime used was the Alexa metric of Traffic Rank, which measures global traffic.  The raw data from Alexa is on the Appendix page on the GenealogyInTime Top 100 list page.

There are 5 genealogy blogs in the "Blog" category on the Top 100 list:

Actually, Kimberly Powell's About Genealogy blog should have been included in the "blog" category but was in the "Articles" category - her articles were written as a blog, and she has an RSS feed.  Her site is #28 on the list with an Alexa Traffic Rank of 54,079.

Congratulations to the above genealogy bloggers on making the Top 100 list.  My understanding is that several other geneabloggers almost made the Top 100.

These traffic rankings fluctuate each month, and I think that I lucked out by getting a large number of hits on some posts in December 2012.  Hey, I don't mind being #2 on the blog list!  Dick Eastman is so far ahead of the rest of us.  He recently wrote that he receives over 74,000 unique visits per day.  In comparison, Genea-Musings received an average of 937 unique visits per day, and 1,584 Page Views per day, in December 2012.  That's a big difference - Dick receives over 75 times my Genea-Musings visits per day.

There are, of course, other measures of traffic, and blogs suffer from the emphasis on Global Traffic Ranking (since the user has to actually go to the website involved).  Blogs can be accessed on RSS readers, Networked Blogs on Facebook, and by email subscription.