Sorting Out the Military Service of Zachariah Hildreth (1754-1820)

I started out with the entries in the book, Massachusetts, Secretary of the Commonwealth, Massachusetts Soldiers and Sailors of the Revolutionary War (Boston, Mass. : Wright & Potter Pritning, 1896-1908):

There are three entries for the name, it may be that they refer to only one person, or two persons, or three persons with the same name.

I think the first listing refers to this specific Zachariah Hildreth, who is not closely related to the Zachariahs of Westford and Townsend.

The third listing is for Zachariah Hildreth and calls him a Corporal, and he joined in 1778 in Col. Jonathan Reed's regiment.  I think this is probably my younger Zachariah Hildreth who settled in Townsend by 1778 (when his first child was recorded there).

The complications arise when I review the SAR Applications on Ancestry.com.  There are two SAR applications (and two for DAR also, but I can't see them) for a Zachariah Hildreth.  One is for Samuel Hildreth Emerson: 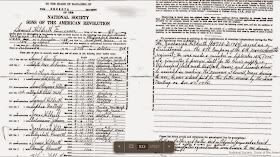 This application attributes the Lieutenant of Westford to my elder Zachariah Hildreth.  I think this is probably correct, but I haven't found any military records to support it..

The second application is for George Henry Woolley: 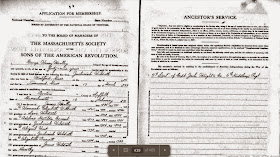 This application attributes the 2nd Lieutenant of Westford as my younger Zachariah Hildreth who settled in Townsend.  I think that this is not correct, but I can't find records to support it.

Then there is the biography of Milo Hildreth in the book Biographical Encyclopaedia of Massachusetts of the Nineteenth Century, that states:

..."Zachariah Hildreth [of Townsend] was a farmer, a cooper, and a military man, who was  elected Captain of the militia in 1790, and held that office until 1796."

This doesn't mention his rank or service during the Revolutionary War, and I would think that it would.

I did find one record in the Revolutionary War Pension Records for John Sherwin of Townsend where Zachariah Hildreth was listed as one of the men who served in 1778 as a guard in Cambridge, which matches the description of Corporal Zachariah Hildreth's service to some extent.

My hypothesis is as above as to each Zachariah Hildreth, but I'm not sure that I've nailed all three of these Zachariah's down yet since I don't seem to have any records for the Westford and Townsend men.