This week's Tuesday's Tip is:  Search for Births, Marriages and Deaths in New York City Records on FamilySearch.

Typical record summaries are shown below: 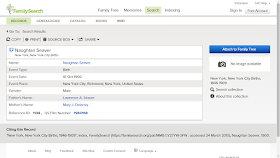 "The collection consists of an index to birth records from New York City including Manhattan, Brooklyn, Bronx, Queens, and Richmond boroughs. The collection covers the years 1847 to 1909."

The birth records provide the parents names (including mother's maiden name in many cases). 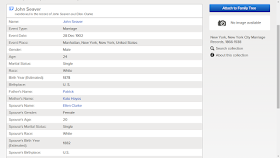 "The collection consists of marriage records from the five municipal boroughs of New York City and their predecessor counties. The dates covered by this collection are 1866 to 1938."

The marriage records provide the parents names in many cases. 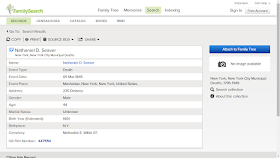 The death records provide the parents names in only a few cases.

While there are no record images available on FamilySearch, a researcher could find the actual registers and/or certificates on FHL microfilm.  The specific microfilm number is listed on each record summary.

I know one thing i'll be doing this next week - mining these three databases for Seaver persons hoping to find dates, maiden names of spouses, names of fathers, and names of mothers.