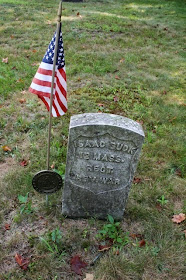 The circumstances of the birth of Isaac Buck are interesting.  The printed Southborough VR book says[1]:

There's a big difference in these two records.  The first implies that Isaac Buck and Mary Richards were married, the second is pretty explicit that they were not married.  The latter record is on the same page, and just below, the list of children born to Joseph and Mary Richards, including their daughter Mary in 1733.

As described in the Richards research, Mary Richards married widower John Phillips, of Shrewsbury,  in 1774 in Southborough, MassacHusetts;  presumably, Mary's son Isaac Buck went to live with his mother in Shrewsbury. John Phillips had four children by his first wife, Hannah Brown, including Martha/Patty Phillips.

"May 18 1780, marriage of Isaac Buck and Patty Phillips, both of Lancaster, consummated by Rev. Reuben Holcomb."

Isaac Buck was listed in Sterling, Worcester County, Massachusetts in the 1790 US census[3].  There was one male over age 16, 3 males under age 16, and 3 females in the household.

In the 1810 U.S. Census for  Worcester County MA, Isaac Buck headed a household in Sterling which included[4]:

The Revolutionary War Pension file for Isaac Buck indicates that for his service, he was awarded a pension of $8 per month commencing 8 April 1818[5].  Isaac Buck's affidavit says:

"I, Isaac Buck, a citizen of the United States, now resident at Sterling in the County of Worcester in the State aforesaid, do on oath testify and declare that in the War of the revolution in the month of December in the year one thousand seven hundred and seventy nine, I entered and engaged in the land service of the United States on the continental establishment, and served accordingly from that time to the end of the war as a private against the common enemy without any interruption or absence, that I belonged to Captain Jackson's company of Artillery in Colonel Crane's Regiment under the command of General Knox, and that I left the service in the month of June 1783 at West Point when the Army was disbanded, and that by reason of my reduced circumstances in life and poverty, I stand in need of assistance from my country and support being now of the age of sixty years - and I hereby relinquish all claims to every pension heretofore allowed me by the laws of the United States if any may be or hath been allowed.  My discharge was lost from my pocket many years since and is not in existence."
/signed/ Isaac Buck.

A schedule of the property belonging to Isaac Buck of Sterling, as of May 1, 1820, included:

"The said applicant is a farmer, but wholly unable to labour the present season on account of a wound in his shoulder in May last - and never expects to perform much labour hereafter.  His wife named Patty Buck is aged 60 years - is barely able to do the work of her house.  I have but one child at home named Isaac Buck aged 14 years and performs as much labour as other farmer's boys at his age, but does nothing toward my support.  This is the whole of my family.  /signed/ Isaac Buck."

In the 1820 US Census, the Isaac Buck family resided in Sterling, Worcester County, Massachusetts[6].  The household included:

In the 1830 US Census, the Isaac Buck family resided in Sterling, Worcester County, Massachusetts[7].  The household included:

In the 1840 US Census, Isaac Buck does not appear as a named entry in the household listings.  However, he does appear in the list of names of Revolutionary War Veterans as "Isaac Buck, age 83" in Sterling, Worcester County, Massachusetts[8].

The death record in the Sterling vital record book reads[9,13]:

No parents are listed for him - only the sad note "Illegitimate".  The age at death given in this record does not agree with the published birth date of Isaac Buck.

He was buried in Legg Cemetery in Sterling[10,11], and has a Sons of the American Revolution placard on his grave, which is under a tree in the left front of the graveyard.

The inscription on the Isaac Buck gravestone in Legg Cemetery in Sterling, Worcester County, Massachusetts says[11]:

There is no gravestone for his wife.

After visiting the Sterling town library, I wrote the Sterling Historical Society.  I received a letter in response from Robert Waters of Sterling MA, who is also a descendant of Isaac Buck, through his son Silas Buck, a farmer, carpenter and millwright in West Sterling.   Mr. Waters provided a substantial list of descendants of Isaac and Patty (Phillips) Buck, plus published and unpublished documents.

A search of the Worcester County Probate Record Index revealed no probate records for Isaac or Martha Buck.