bgwiehle's comment on the Wednesday post asked:  "...it would be interesting to see what you get if you use one of your non-American ancestors or relatives (Canadian, English, etc.). Are there events that are included that don't appear in an American profile of the same era? Are the texts worded in a way that explains a different view-point of a shared event?"

In response, HistoryLines principal Jeff Haddon emailed me with this information:

"In preparation for your next post on a non-American ancestor, I wanted to make sure you know that HistoryLines currently covers the following countries, with many more coming in the following weeks and months. We're adding countries in order of priority based on surveys of our users.
My thanks to Jeff for the input.

Fortunately, one of my test trees input to HistoryLines over the past three months was for my third great-grandfather, Samuel Vaux (1816-1880), born in England and died in Kansas.  [I say fortunately because when I tried to do a new tree person HistoryLines asked me to subscribe...I haven't done that yet!]

Here is the top of his HistoryLines Story: 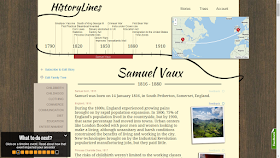 And the next screen down: 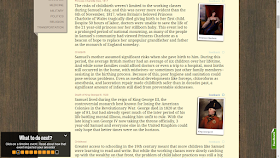 The Story elements created by HistoryLines for Samuel Vaux (1816-1880) include:

Here is the end of Samuel's Story on HistoryLines: 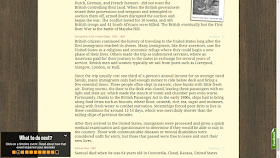 I have not added any custom events to this Story to date.

The Story assumes that Samuel spent his entire life in England.  I don't know what would happen if I inserted a migration story into the file, and then added information about Samuel for his life in the USA.  Would the Story elements change to be USA based?

I learned a bit more about English history and lifestyles by reading the stories in Samuel's Life Story above.

Jeff has provided answers to my questions posed in the first two blog posts about HistoryLines, but I'll save them for next week in hope that Jeff will answer my question above.