I got home from the dentist's office today at 12 noon with my mouth half numb  after a "deep cleaning and root planing" - if you can avoid this treatment, I recommend it!!  It's not as bad as periodontal surgery though (been there, done that too).

I digress.  I felt like doing some "comfort genealogy" for genea-therapy, so here is what I did:

1)  There was an email from FamilySearch giving me my weekly Watch List information about changes to my ancestors on the FamilySearch Family Tree.  Lookee there - there were changes for  my 7th great-granfather Mulford Martin (1713-1741) L4WB-5V6 and his father, Peter Martin (1693-1756) LDF2-JKX.  I didn't see anything different than what I have, but they don't have any sources or "real" notes yet.  Another item for my to-do list! 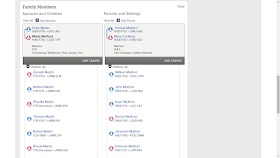 4)  Reviewing the profile for Thomas Mulford, I found: 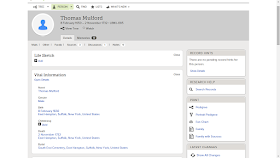 He died in East Hampton, Suffolk County, New York, and is buried there.  My first thought was "is there a probate record that might name his children, especially Marie (Mulford) Marrtin of Piscataway, New Jersey."

4)  Off to the New York Probate Records, 1629-1971 collection on FamilySearch.  There were no Suffolk county probate records on the list of Counties.  So I checked the FamilySearch Wiki for New York Probate Records and found that Suffolk County was formed in 1785, and records from 1662-1785 were probably in New York County.  I easily found Thomas Mulford 1732 in the Will Index for New York County.  His will is in Volume 11, page 511.  Here it is: 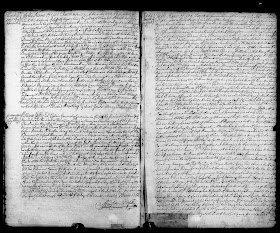 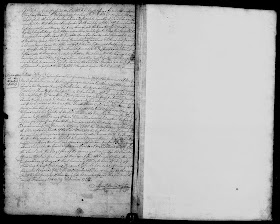 I read the will online and did not see a mention of a daughter, Marie or Mary...hmmm.  Marie died in about 1730, but Thomas Mulford wrote his will in 1727, so she should be mentioned.  All of his other known children are mentioned.

5)  I Googled [ thomas mulford east hampton will 1732] in the off chance that someone has transcribed it, and there are a number of transcriptions online.  The Long Island surname website had a life summary and a will transcription - see http://www.longislandsurnames.com/getperson.php?personID=I00266&tree=Mulford.  There were others on the Google match list.  The will transcription was a lot easier to read, and there is no mention of Marie (Mulford) Martin.  The list of children did not mention Marie either.  Several other sites on the Google match list were checked, with no mention of Marie.  There are, of course, a lot of online family trees with Marie (Mulford) Martin included as a daughter of Thomas and Mary (Conkling) Mulford, including the FamilySearch Family Tree.  8 of the first 50 Ancestry Member Trees give her parents as Thomas and Mary (Conkling) Mulford.  There are a number of MyHeritage tress that also have that relationship.

6)  I concluded that to date I have seen no evidence of the relationship of Mary (Mulford) Martin to Thomas and Mary (Conkling) Mulford.  What should I do?  I decided to add a Discussion item to the FamilySearch Family Tree profile for Thomas Mulford.  I copied the will transcription into the discussion also.  Then I asked the question:

I probably should disconnect Marie Mulford from the Thomas and Mary (Conkling) Mulford family also, but I'll wait to see if I get any response.

7)  I get very few responses to Discussion items like this on FamilySearch.  I get immediate responses, and action, on Geni.com and on WikiTree discussion items.  Why is that?  Is no one watching there folks like I am?

8)  Well, the anesthetic has worn off, I don't have a headache, the teeth are a bit sore but not bad, the bleeding has reduced.  An hour's work, and genea-therapy helps!!  That was fun.  Not productive, but fun, and I learned some things in the process.

A nap might be in order on this Friday afternoon.  Or not, since I have two blog posts for Saturday to write before 7 p.m. tonight.  A geneabloggers work is never done, it seems.