The treasure today is the  1798 Direct Tax List of Pennsylvania for Rudolf Spangler in York, York County, Pennsylvania: 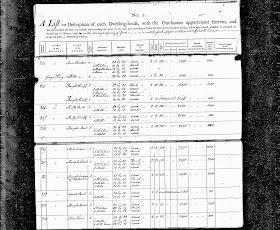 The columns headers and the Rudolf Spangler entry:

The data extracted from this record for Rudolf Spangler is:

I am confused by the Occupant and Owner columns.  This record apparently says that George King resided on a number of properties owned by several different persons, including a number of dwelling houses.  There are many pages with this same phenomenon - an occupant on several properties.

I looked at all of the entries for the entries with or without a Senior indicator.  There were no entries where Rudolph Spangler was an Occupant - but there were several where he was an Owner.

If a reader has more insight into these records, I would appreciate learning about it.