Down the Research Rabbit Hole - Who is Mr. Clotworthy?

Her last name at the time of her passport and visa was Clotworthy.  So I couldn't resist going down the research rabbit hole, to follow the bright shiny object (BSO) that is Mr. Clotworthy's first name.  And vitals, and more.

To find all of that, I used Sadie Clotworthy's name to search on Ancestry.com limiting the search to the state of Colorado, where Sadie was born, married, died, and is buried according to what I knew about her.

There were some results on Ancestry.com for Sadie, especially City Directories.  There were entries for Sadie Clotworthy in the Colorado Springs city directories from 1938 to 1963.  The earliest one shows: 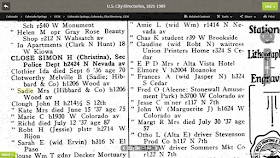 Melville B. Clotworthy was the husband of Sadie (Vaux) (Hibbard) Clotworthy.  They both worked at Hibbard & Co. in Colorado Springs, and in 1938 resided at 1206 Wood Avenue.

That made the resulting search fairly easy.  Here is the top of the Search results on Ancestry.com for Mel* Clotworthy restricted to Colorado: 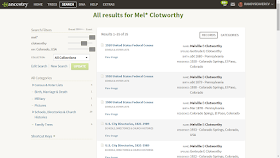 And the bottom of thel ist (there were many City Directory matches on the list that are not shown): 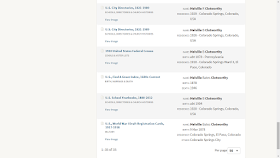 The useful results included the World War I draft registration which defined his full name, his birth date and birth place, the 1910, 1920 and 1930 U.S. census records showing him with his first wife, and the US Find A Grave Index which indicates he died in 1946 and is buried in Evergreen Cemetery in Colorado Springs.  Here is the Find A Grave entry: 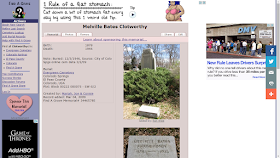 One of the suggested records was a Pennsylvania and New Jersey Church and Town Record collection for his birth date, birth place and birth name.

I also checked the Ancestry Member Trees (two entries) and the FamilySearch Family Tree (M.B. Clotworthy).  I looked on GenealogyBank, MyHeritage and Ancestry for newspaper articles about Melville Clotworthy, and found several for his first marriage, but none for his second marriage and death.

From all of the collected information, I was able to add content and sources to my database for Mr. Clotworthy:

A Google search revealed the following in a historical homes record (the building is now a Chipotle Restaurant!):

"Cassius A. Hibbard erected this building to house his growing Hibbard & Company Department Store. In 1892, Mr. Hibbard came to Colorado Springs with his mother, Mrs. P. Inscho, from Elmira, New York. They started a small shop selling millinery and ladies notions. In 1897, Melvin B. Clotworthy joined the company and eventually became a partner. The business experienced steady growth, and, in 1914, this building was constructed. Thomas P. Barber was the architect. The building opened for business on 11 December 1914, just in time for the Christmas shopping season.

"Cassius A. Hibbard and Melville B. Clotworthy were shown as the proprietors of the store in 1921 and 1931 city directories. In 1931, Mr. Hibbard was also listed as the chairman of the board of the Colorado Springs National Bank. Mr. Hibbard died in 1931 and Mr. Clotworthy in 1946, but the department store continued to be run by their descendants. In 1953, the partners included brothers Robert G. Hibbard and Donald A. Hibbard and their mother, Mrs. Sadie Clotworthy. Robert was in charge of the active management of the store."

Not bad for about 60 minutes of effort in June 2015.  If I had done this in, say, 2000, I would be writing a letter or email to the Colorado Springs library or a genealogical society requesting a City Directory lookup.  It probably would have taken me 6 months to accumulate the information I found today in an hour.

I stopped after collecting the above, since Melville and Sadie (Vaux) Clotworthy are not my ancestors.  I'm sure that there are more records for them in repositories and even online.

Why do I chase these BSOs?  Because they apply to relatively close cousins, whose descendants may share autosomal DNA with me.  They may not have a family tree online yet, but they mat have information about our shared ancestors, including family letters or photos from my ancestors.  My Carringer and Vaux ancestors were great letter writers, but I have relatively few that they wrote because they sent them to relatives in distant places.

Stay tuned to Genea-Musings for another episode of "Down the Research Rabbit Hole" - I just can't help myself from chasing these Bright Shiny Objects.