It's time for another edition of "Seavers in the News" - a semi-regular feature from the historical newspapers about persons with the surname Seaver that are interesting, useful, mysterious, fun, macabre, or add information to my family tree database. 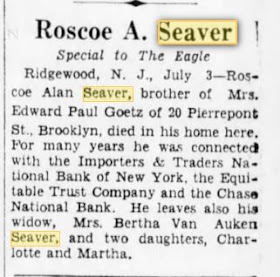 "Roscoe A. Seaver
Special to The Eagle
Ridgewood, N.J., July 3 -- Roscoe Alan Seaver, brother of Mrs. Edward Paul Goetz of 20 Pierrepont St., Brooklyn, died in his home here.  For many years he was connected with the Importers & Traders National Bank of New York, the Equitable Trust Company and the Chase National Bank.  He leaves also his widow, and two daughters, Charlotte and Martha."

Roscoe Allen Seaver was born 8 January 1870 in Adams, New York, the son of Charles H. and Caroline (Herth) Seaver.  He married Bertha G. Van Auken (1865-1949), and they apparently had two children, Charlotte and Martha.  I had Roscoe and Bertha in my RootsMagic family tree database, but I did not have Roscoe's death date and place, or his daughters' names.

I was able to easily find the two daughters in birth, marriage and death records, along with Charlotte's husband's information.  Martha died unmarried in 1950 in France.

That leaves Roscoe's sister, named in the obituary as "Mrs. Edward Paul Goetz" of Brooklyn, N.Y.  Roscoe's only sibling was Carrie A. Seaver (1873-1947), so I looked for the Goetz family in the records and easily found them, and added them to the RootsMagic family tree database.