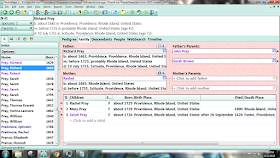 The birth date, birth place, and parentage of Rachel (--?--) Pray are not known.  She was probably
born about 1685 in Rhode Island.

Rachel married Richard Pray of Providence in about 1723, probably in Providence[1,4].  They had
three known children, but no birth records are available for them (dates are estimated based on
children marriage dates and spouse's birth dates):

The children of Richard and Rachel (--?--) Pray are listed in the book Genealogical Dictionary of
Rhode Island by John Osborne Austin and George Andrews Moriarty[1].

The Richard Pray family resided in what is now Smithfield, Rhode Island.

Rachel Pray and her children were admitted to the town of Scituate, Rhode Island on 18 April 1741.
The town council record reads[2]:

"Whereupon it is Voted that the sd Rachel Pray and her Children be admited to dwell in this Town
untill further orders from this Council."

It is not known if Richard Pray accompanied his wife and children from Smithfield to Scituate at the
time of the admission to Scituate.  Perhaps they separated for a period of time. However, he was
"of Scituate" when he wrote his will on 15 March 1755[3].

The date and place of Rachel (--?--) Pray's death and burial are not known.  Evidently, it is after she
moved with her children to Scituate in 1741 and before Richard Pray wrote his will, since she is not
mentioned in his will[3].
5)  SOURCES