Seavers in the News - Edward C. Seaver Shot Down Twice in World War II and Survived

It's time for another edition of "Seavers in the News" - a semi-regular feature from the historical newspapers about persons with the surname Seaver that are interesting, useful, mysterious, fun, macabre, or add information to my family tree database.

This week's entry is from the Burlington [Vt.] Free Press newspaper dated 23 January 1945: 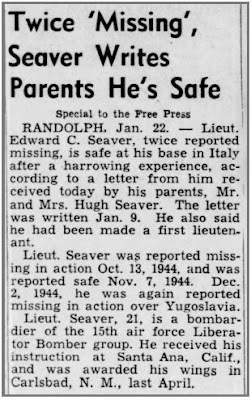 The transcription of the first obituary is:

"RANDOLPH, Jan. 22. -- Lieut. Edward C. Seaver, twice reported missing, is safe at his base in Italy after a harrowing experience, according to a latter from him received today by his parents, Mr. and Mrs. Hugh Seaver.  The letter was written Jan. 9.  He also said he had been made a first lieutenant.

"Lieut. Seaver, 21, is a bombardier of the 15th air force Liberator Bomber group.  He received his instruction at Santa Ana, Calif., and was awarded his wings in Carlsbad, N.M., last April."

The source citation for this article is:

Edward C. Seaver (1922-1983) was born 26 October 1922 in Randolph, Vermont to Hugh Leland and Ethel Pearl (Rye) Seaver.  He married 1 September 1946 to Helen Virginia Scott in East Poultney, Vermont.  He died in September 1983.  I have information that they had three children.

I sincerely hope that Edward talked about his escapades during World War II serving in the Army air Corps in Europe with his children.

Edward C. Seaver is my 9th cousin once removed.