This week's document for Amanuensis Monday is the 1812 will of  George Ruth of Cumru Township, Berks County, Pennsylvania: 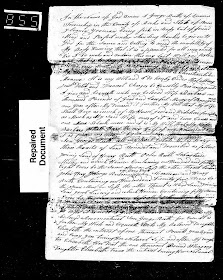 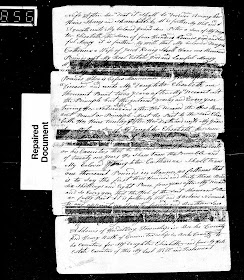 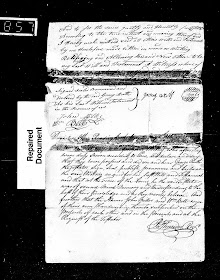 The transcription of this will is:

[George Ruth estate, image 2 of 4]
In the Name of God Amen.  I George Ruth of Cumru
Township in the County of Berks and State of Penns-
ylvania yeoman being sick in Body but of sound
Mind and Perfect under standing thanks be given to
God for the same and Calling to mind the mortality of
My Body Knowing that is is appointed for all men once to
die I do make and ordain this my Last Will and testam-
ent that is to say, Principally and first of all I recom-
mend my soul into the Hands of God that gave it and
My Body to the Earth to be Buried in a Christian like
Manner.  It is my Will and I do hereby Order that all my
just Debts and Funeral Charges be Honestly Paid and adgusted.

I give and bequeath unto my beloved Wife Barbara one
thousand Pounds of Good and Lawful Money of Pennsyva^nia
one year after My decease.  It further My Will that My Wife
Shall have as much of my Husel good and Kidchen for??????
as Much as My said Wife ones of it and twoo Cowes and
one Mare Black mare and it is My Will that My Wife
Barbara shall have the use of Half of my Personal Esta-
t is ?????? my ?????? ??? ??????? ???????. ??? ?? ?????
Son George Ruth all my Real Estate that is to say
three thracts of Land Boundet and Described as follow
joining Land of Henry Ruth Peter Ruth Sebastian
Miller and ulrich Hauver Containing one Hundred and forthy
Eight Ecers be the same More or Less the other thract bounded
John Hay George Ru?man ^and Georg Kr??k^ John Harman and Henry
Ruth Containing one Hundred Twenty five Acres be
the same More or Less the other thract is Wood Land joining
Land Jacob Ludwig and ulrich Hareder Containing fifty seven
Ecers be the same more or less all together Three hundred
and Thirty Ecers be the same more or less With all the
A ????? ?????? ?? ?? ???? ?? ???????? ?? ???? ????? ???? ???
for What it is ??????? give the above ????? land to My
beloved abovementioned Son George Ruth for Ever It is
further My wish and bequeath Unto My beloved daughter
Elisabeth the interest of one thousand Pounds yearley and
and Every during Her Natural Life and after My daugh-
ter Elisabeth Her deat the one thousand Pound Where my
daughter Elisabeth tranes the interest during her Natural

Registers Office Reading Berks County May 11^th 1813
????????????????????????????????????? John Miller and
W^m Bell Witness to the foregoing Writing Who after they
were duly Sworn according to Law, did declare and say
that they were present and did see and hear George Ruth
the testator Sign, Seal, publish, pronounce and declare
the said Writing as and for his Last Will and Testament
and that at the time of the Doing he the said Testator
was of sound Mind Memory and Understanding to the
best of their Knowledge and as they verily believe.  And
further that the Names John Miller and W^m Bell were
of their own Handwriting thereto subscribed in the
presents of each other and in the presents and at the
Request of the Testator.
Ja?? Shneider  Reg^r

The presence of the tape obscuring several lines of the handwriting on all three pages severely hampers understanding of the details of the legacies.In addition, the spelling ability of the person writing this will for George Ruth doesn't help.

The source citation for this estate file is:

The mention of daughter Catherina, wife of Jacob Konig, is of paramount importance to me, because Philip Jacob and Catherina (Ruth) Konig are my 4th great-grandparents.  They married before 1789, probably  in York County, Pennsylvania.