This week's entry is from the Pottsville [Penn.] Republican newspaper dated 29 September 1941: 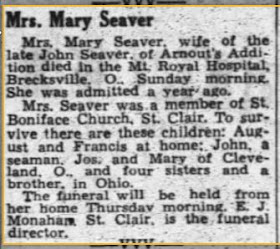 "Mrs. Seaver was a member of St. Boniface Church, St. Clair.  To survive there are these children:  August and Francis at home; John, a seaman; Jos. and Mary of Cleveland, O., and four sisters and a brother, in Ohio.

"The funeral will be held from her home Thursday morning, E.J. Monahan, St. Clair, is the funeral director."

The source citation is:

This obituary provides a married name, a death date, a death place, names of her husband and their children, and mentions siblings without naming them.

I found the John and Mary Sever family (with August, Aulioas, Frank, John, Joseph and Mary in the 1930 U.S. Census in St. Clair, Schuylkill County, Pennsylvania, which provided birth years and birth states/countries for the family members.  Suggested Records on Ancestry.com provided more records, including a death certificate for a child, a social security application entry for a child, a Find A Grave memorial, a daughter's marriage record that provided her maiden name, and other census records.  There was similar material for John Sever also.  It appears that Sever was the name they used throughout their lives.

I am not related to any of these Sever/Seaver people - John and Mary (Jacksa) Sever were born in Austria and/or Poland.  However, now they are added to my RootsMagic family tree database.  I have more research to do for their profiles.

There are over 9,500 Seaver "stories" in my family tree - and this was one of them.   Life happens, accidentally and intentionally, and I hope that Mary was a devoted wife and mother to six children.  I am glad that I can honor Mary (Jaksa) Sever today.

You never know when a descendant or relative will find this blog post and learn something about their ancestors or relatives, or will provide more information about them to me.

Disclosure:  I have a complimentary subscription to Newspapers.com and have used it extensively to find articles about my ancestral and one-name families.