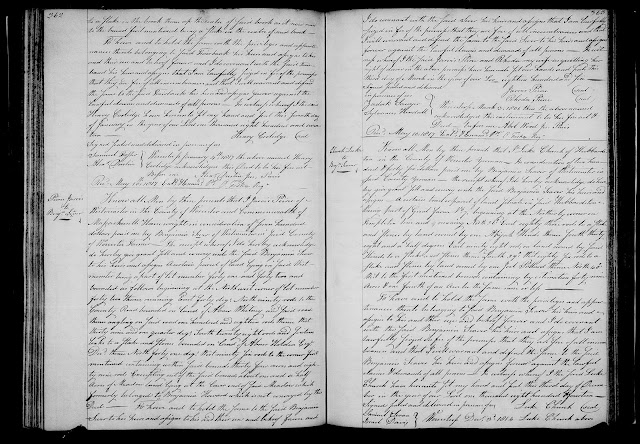 The transcription of this deed is (starting in the middle of page 362]:

Know all Men by these presents that I Jarvis Peirce of
Westminster in the County of Worcester and Commonwealth of
Massachusetts Housewright in consideration of seven hundred
dollars paid me by Benjamin Sever of Westminster in said County
of Worcester Farmer -- The receipt whereof I do hereby acknowledge
do hereby give grant sell and convey unto the said Benjamin Sever
to his heirs and assigns A certain parcel of land lying in said West-
minster being a part of lot number forty one and forty two and
bounded as follows beginning at the Northwest corner of lot number
forty two thence running East forty deg's North ninety rods to the
County Road bounded on land of Abner Whitney and said road
thence angling on said road one hundred and eighteen rods thence West
thirty nine and one quarter deg's South twenty eight rods and sixteen
links to a stake and stones bounded on land of Abner Holden Esq'r
Dec'd thence North forty one deg's West ninety six rods to the corner first
mentioned containing within said bounds thirty four acres and eigh-
ty nine rods Excepting out of the said bounds about one and a half
Acres of Meadow land lying at the lower end of said Meadow which
formerly belonged to Benjamin Howard which is not conveyed by this
Deed.     To have and to hold the same to the said Benjamin
Sever to his heirs and assigns to his and their use and behoof forever and
[Volume 203, page 363]
I do covenant with the said Sever his heirs and assigns that I am lawfully
seized in fee of the premises that they are free of all incumbrances and that
I will warrant and defend the same to the said Sever to his heirs and assigns
forever against the lawful claims and demands of all persons.   In wit-
ness whereof I the said Jarvis Peirce and Rhoda my wife as quitting her
right of dower in the above premises have hereunto set our hands and seals this
third day of March in the year of our Lor eighteen hundred and six.
Signed sealed and delivered                         Jarvis Peirce  {seal}
in presence of us                                           Rhoda Peirce  {seal}
Zadock Sawyer     }
Sylvanus Kendall  }   Worcester ss March 13, 1806 then the above named
acknowledged this instrument to be his free act &
Deed - before me  Abel Wood Jus. Pacis
Rec'd  May 10, 1817  Ent'd & Exam'd pr O. Fiske  Reg'r.

The source citations for this land record is:

Read other transcriptions for my ancestors in Amanuensis Monday Posts.
The URL for this post is:  https://www.geneamusings.com/2021/07/amanuensis-monday-1806-deed-of-jarvis.html
Copyright (c) 2021, Randall J. Seaver