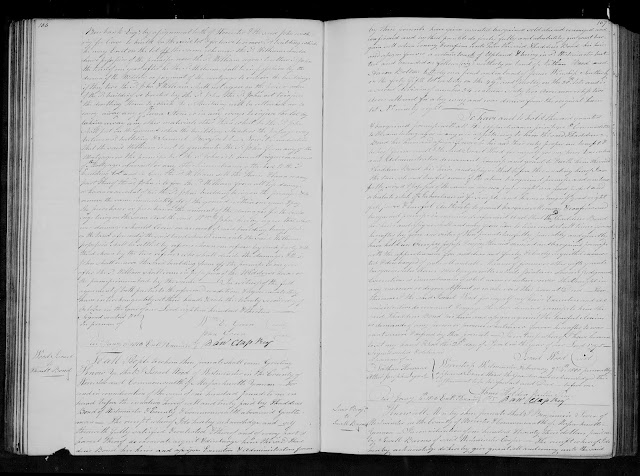 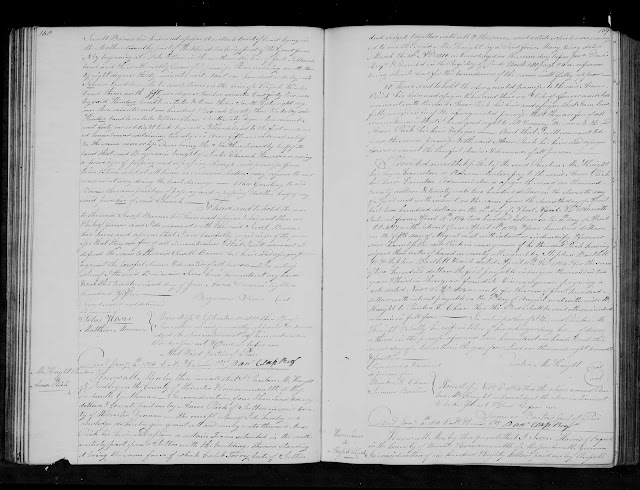 The transcription of this deed is (starting near the bottom of page 167 (right-hand page of image):

[Volume 199, page 167]
Know all men by these presents that I Benjamin Sever of
Westminster in the County of Worcester & Commonwealth of Massachusetts
Yeoman.  In consideration of one hundred & twenty three dollars paid me
by Sewell Barnes of said Westminster Cooper, The receipt whereof I do
hereby acknowledge do hereby give grant sell and convey unto the said
[Volume 199, page 168]
Sewell Barnes his heirs and assigns A certain tract of land lying in
the Northwestwardly part of Hubbardston being part of the Great farm
N'o. 7 beginning at a stake & stones in the northwardly line of Joel Pollards
land and the southwardly Corner of s'd premises hence running north thir-
ty eight degrees thirty minutes west about one hundred rods by said
Severs land to a stake and stones in the line of Abijah Hindes
land thence north fifty six degrees twelve minutes East forty two rods
by said Hindses land to a stake & stones thence South thirty eight deg-
rees three minutes east one hundred & two rods twenty three links by said
Hindses land to a stake & stones thence South sixty degrees ten minutes
west forty one rods eight links by said Pollards land to the first mention-
ed corner bound containing twenty six Acres fifty six rods and a half
be the same more or less Acres being the Southeastwardly half of the
land that said Benjamin bought of Luke Church However reserving
a privilege of passing and repassing through said premises from
time to time and at all times as occasion shall or may require the most
convenient way doing the least damage.  Also Granting to said
Barnes the same privilege of passing and repassing the other half of my
said purchis of said Church.
To have and to hold the same
to the said Sewel Barnes his heirs and assigns to his and their use
& behoof forever and I do warrant with the said Sewel Barnes
his heirs and assigns that I am lawfully seized in fee of the prem-
ises that they are free of all incumbrances & that I will warrant and
defend the same to the said Sewell Barnes his heirs and assigns forever
against the lawful claims & demands of all persons.  In witness
whereof I the said Benjamin Sever have hereunto set my hand
& seal this twenty second day of June Anno Domini Eighteen
hundred fifteen.                                         Benjamin Sever  {seal}
Signed sealed and delivered
in presence of
Silas Howe               }   Worcester ss September 11 1815 then Benj'a
Matthias Mosman  }    Sever above named personally appeared & acknowl-
edged the above instrument by him subscribed
to be his free act & Deed -- before me
Abel Wood Justice of Peace.
Rec' Jan'y 4'th 1816 Ent'd & Exam'd pr Dan Clap Reg'r.
The source citations for this land record is:
"Massachusetts, Land Records, 1620-1986," digital images, Church of Jesus Christ of Latter-Day Saints, FamilySearch (https://familysearch.org : accessed 1 August 2021), Worcester County, "Deeds 1815-1816, vol. 198-199," Volume 199, Pages 167-168 (images 462-463 of 724), deed of Benjamin Sever to Sewell Barnes, executed 22 June 1815, recorded 4 January 1816; citing original records in County Courthouses, and on FHL Microfilms.
This deed is for a 26 acre parcel of land in Hubbardston, which was part of Great Farm #7 in Hubbardston, bordering on Templeton line.  Benjamin Seaver previously bought 49 acres of this land in 1814 for $246, and sold 23 acres of it to Sewell Barnes in this deed, who paid $123 for the land.
Benjamin Seaver (1757-1816) of Westminster, Massachusetts married  Martha (Whitney) Seaver (1764-1832) in 1783, and they had ten children between 1784 and 1812.
Benjamin Seaver (1757-1816) and Martha Whitney (1764-1832) are my 4th great-grandparents, and Benjamin Seaver (1791-1825) and Abigail Gates (1797-1867) are my 3rd great-grandparents through their son Isaac Seaver (1823-1901).
=========================================
NOTE: Genea-blogger John Newmark (who writes the excellent TransylvanianDutch blog) started a Monday blog theme years ago called "Amanuensis Monday." John offers this definition for "amanuensis:"

Read other transcriptions for my ancestors in Amanuensis Monday Posts.
The URL for this post is:  https://www.geneamusings.com/2021/08/amanuensis-monday-1815-deed-of-benjamin.html
Copyright (c) 2021, Randall J. Seaver